The Changing Face of the Music Industry

From the eighties to the present music consumption has taken many turns resulting in massive changes. Never before have artists and labels had to contend with such a complex market, in this four-part series we cover the rise and fall of the CD; seeing physical record sales all but disappear and the impact these changes in consumption had for live performance. Later we look at trends over the last ten years and in part four, a practical and current guide to generating income from your music.

Pt 1. The Rise and Demise of the Compact Disc

the rise and demise of the compact disc
Infogram

Consider this for a moment, until 2003 all record sales were physical… then, between 2004 and 2011 artists had an entirely new challenge to face – getting paid…. Wait – not new – more complicated!

Not only did earning become more complex due to the emerging paid consumption methods but along with this rise in connectivity came P2P sharing and between the new Millenium and 2017 music sales in the United States dropped by more than 50%. From 2004 through 2009 alone, approximately 30 billion songs were illegally downloaded on file-sharing networks, you don’t have to be a genius to understand the influence that widespread piracy had then and still has on artists’ earnings and the wider industry today.

While this all sounds rather scary, there have been some benefits of the advances in distribution methods, thanks to services like TuneCore selling a track on iTunes as an independent could now leave an artist with 90~ c per 1.29 purchase. Instantly independents had access to a very lucrative deal and even for those signed to a label the takings were simple and healthy with typical record contracts giving artists 12 to 20 percent of sales, depending on their profile, looking at a huge artist from the era Adele, split the difference and consider the cut to be 16 percent. From the original $1.29 price – the artist’s cut for sale of the master recording was about 20 cents + her mechanical rights (9,5 cents – which would have been split with the co-writer) 25c for ease of numbers sake per sale. The label takes 60c on this deal, to cover marketing, overheads & of course profit. Not too bad.

To see what was happening with a record deal for the now dying CD with a sale price $18 In the end, in very broad terms, that left about $1.93 per sale in profit for the artist and $9.74 for the label. Not too bad either but often the cost of the physical items and other miscellaneous associated costs such as returns were taken from the artist as well. 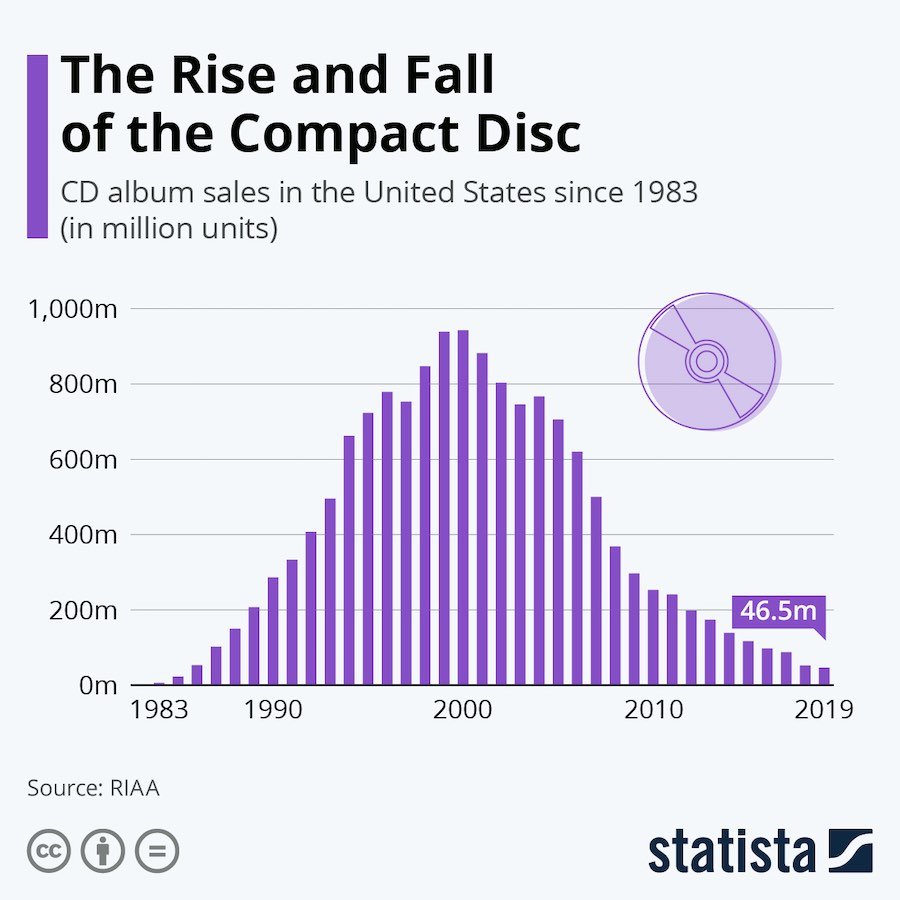 So with the rise of the CD – the first digital medium to experience standard adoption – to be the first in many digital changes to follow, music became much easier to access and listen to meaning record labels and artists saw income like never before. Along with this technological advance came the ease of access to most if not all facets of the music business and outside those artists selling volume via digital platforms – the realisation that making money through releasing music, had become much more challenging became apparent and in the process killed the thing that started it all – the CD.

Other sources used in this article: