Incorporating imperfection in computer music is a sustained discussion among composers and producers. Concepts like, working with grid and quantization sucks out the life from loop based pattern music. James Holden introduced a remarkable tool to humanize computer music which he already uses for his live shows. 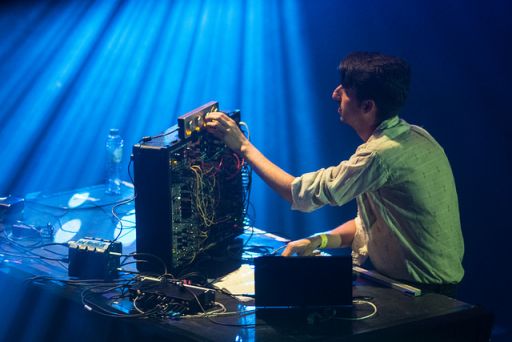 This is what James Holden tells about it briefly,

” In my own musical work, despite coming from a computer-based music background (that being the easiest entry point for a teenager), I’ve spent years experimenting with ways to make my music sound real; playing everything I could live as well as building chaotic systems (in software and in my modular synthesiser) to simulate the kind of expressive feedback that occurs between musicians and generate similar levels of non-designed fine detail. But convincing timing was always a difficult thing to achieve without actual musicians being involved.

Now using the model proposed in Holger Hennig’s research I’ve developed a set of Max for Live devices which are able to inject a realistic timing into multiple computer generated parts, as if they were being played by musicians performing together. It can even listen to input from a real musician (for example, the jazz drummer who plays together with me in my live shows) and respond to his or her timing errors in a natural manner. This is the first time such a facility has been available for computer sequenced music: as of now there’s no excuse for over-straightened airbrushed fakery. It’s a free download at the link below – consider it my contribution to the resistance. “